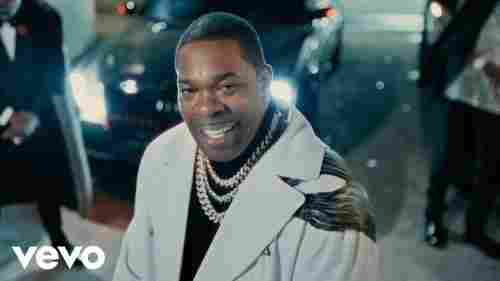 [Intro: Busta Rhymes]
I go on and on and on and
Don't approach me, I back the ratchet, that's a warnin'
Yeah, hahaha
Y'all gon' appreciate this slap today
Tie him, Allah, King Asia had it, galore
AKA Buss' Rhymes, Big Daddy Kane, and the motherfucker
Yo, we in the motherfucker this evenin'
Rest in peace Biz Mark'
Rest in peace to all of our fallen soldiers
Rest in peace to PnB Rock, look
Look, somebody pouch my cran
And put it back in my motherfuckin'—
Yo, yo
[Verse 1: Busta Rhymes]
We on cost now, back with the force, respect the boss
Y'all stood off, shit leak out your head, like pasta sauce
Who's to blame? (Uh) Burden this bitch and bang a flame
Ayo, we back (Montgomery, bitch), you know the name (Ayo)
You're ridin' on empty, you should refuel the amigo
Most you niggas is finished, the pockets of complexico
Passed it though, cook you and serve you, like a casserole
And lay you wide on the street and display you, like a fashion show
Sorry, but I have to go, my spitter's full of rockets
And I'm dumb with all you niggas in quadrilateral boxes
Compatible with toxins, the TEC's jam electrical
Reflect the image of niggas gettin' chopped with a thousand options
The shit that I can cock this, mixed like type-two diabetes
Mixed with high cholesterol, honorary blockage (Haha)
You better call the cops, kid
Or quickly turn into one of them niggas abroad
As a hailin' or solvable hostage
Next throw the coke around, like them niggas in moshpits
A lot of niggas think they got it, but nigga just pop shit
We 'bout to give niggas bangers, controllin' the block itch
The fact that I'm holdin' a rock while I'm throwin' a knot, bitch

[Verse 2: Conway the Machine]
Yeah, I see these niggas still lyin' on they raps and buyin' they own plaques (Huh?)
I'm so relaxed, I don't reply if you don't at
Killer been chillin', but somebody die and the bro snap
He dyin' to go "Grraht"
That's when y'all niggas gon' be dyin' to go rat
In and out of jail, so we don't mind if we go back (Huh)
Got the rap, Ben O'Donnell with science, don't know cap (Woo)
Hall of fame and we're just analyzin' my old stats (Ah)
Glidin' on those tracks (Ah), My catalog in it's entirety all slap
And my impact is like that of a ball bat
Swing from Aaron Judge, bring Canary studs (Talk to 'em)
Yeah, Mercedes concept, where you get that from?
You talkin' online and I ain't worried 'bout that bum (Come on, man)
I was bullshittin', then I three-peat back to back, uh
Machine brought that feel back, how they ain't gon' jack, son? (Woo)
I'm 'bout to go on my Kobe and Shaq run (Ah)
Punch a nigga in the chest and get a collapse month (Hahaha)
Dope street Maybach, you know where I'm at, uh (Boom, boom, boom, boom, boom, boom, boom)
You might also like
Poland
Lil Yachty
Aston Martin Truck
Roddy Ricch
Forever
Lil Baby
[Verse 3: Big Daddy Kane]
Made a solemn oath to never stop gettin'
Decades later, skip our business
Spinnin' whilst we sayin' Harry Potter picture
Tried to give my game, but they said he not listenin'
Some of y'all got that Fetty Wap vision
My third eye proved my F.N. carnation
Move like the feds and hit every spot different
Ha, when me and Buss' hit the block—, listen
Let me try to spit it to you logically
You got Kevin's heart but no state property
I claim whatever in this sheer monopoly
Park, please, boardwalk them greens, I got the three
Stop playin', y'all, I got a third sum eat
But I left a spot at the table, it's common courtesy
The urgency for currency certainly workin' me, purposely
Even inversely, turnin' me into Hercules
No laggin' and that's the dept of it
If y'all don't know the roots to this, let me Questlove it
Instead of y'all livin' on a set budget
Make sure that bag secure, next subject
I ain't at the ATM to check luggage
My bags carry on (We'll come to you later)
'Cause I'm a real earner boy
And you don't wanna turn the boy into a nocturnal boy
You 'bout to be a learner, boy
Enjoy yourself until I pop smoke and burn a boy
In the story, no one goes after me
I ain't contract so you can last for me
Don't ask me to pass the mic', that's blasphemy
Fuck I look like to y'all? David Cassidy
[Outro: Busta Rhymes]
A big daddy, haha
My man, my man wrote
Let's count this bread because you been the type of fellows
Hahaha